Gen 1:11 And God said, Let the earth bring forth grass, the herb yielding seed, and the fruit tree yielding fruit after his kind, whose seed is in itself, upon the earth: and it was so.

1Pe 1:24 For all flesh is as grass, and all the glory of man as the flower of grass. The grass withereth, and the flower thereof falleth away[.]

Dan 2:21 And he changeth the times and the seasons: he removeth kings, and setteth up kings: he giveth wisdom unto the wise, and knowledge to them that know understanding[.]

Psa 31:15 My times are in thy hand: deliver me from the hand of mine enemies, and from them that persecute me.

His Timing | Our Times | His Story

Exo 12:1 And the LORD spake unto Moses and Aaron in the land of Egypt, saying,

Exo 12:2 This month shall be unto you the beginning of months: it shall be the first month of the year to you.

Exo 12:3 Speak ye unto all the congregation of Israel, saying, In the tenth day of this month they shall take to them every man a lamb, according to the house of their fathers, a lamb for an house:

Exo 12:4 And if the household be too little for the lamb, let him and his neighbour next unto his house take it according to the number of the souls; every man according to his eating shall make your count for the lamb.

Exo 12:5 Your lamb shall be without blemish, a male of the first year: ye shall take it out from the sheep, or from the goats:

Exo 12:6 And ye shall keep it up until the fourteenth day of the same month: and the whole assembly of the congregation of Israel shall kill it in the evening.

Gen 7:11 In the six hundredth year of Noah’s life, in the second month, the seventeenth day of the month, the same day were all the fountains of the great deep broken up, and the windows of heaven were opened.

Gen 8:4 And the ark rested in the seventh month, on the seventeenth day of the month, upon the mountains of Ararat.

Gen 8:21 And the LORD smelled a sweet savour; and the LORD said in his heart, I will not again curse the ground any more for man’s sake; for the imagination of man’s heart is evil from his youth; neither will I again smite any more every thing living, as I have done.

Gen 8:22 While the earth remaineth, seedtime and harvest, and cold and heat, and summer and winter, and day and night shall not cease.

Dan 2:20 Daniel answered and said, Blessed be the name of God for ever and ever: for wisdom and might are his:

Dan 2:21 And he changeth the times and the seasons: he removeth kings, and setteth up kings: he giveth wisdom unto the wise, andknowledge to them that know understanding[.]

Dan 7:23 Thus he said, The fourth beast shall be the fourth kingdom upon earth, which shall be diverse from all kingdoms, and shall devour the whole earth, and shall tread it down, and break it in pieces.

Dan 7:24 And the ten horns out of this kingdom are ten kings that shall arise: and another shall rise after them; and he shall be diverse from the first, and he shall subdue three kings.

Rev 16:10 And the fifth angel poured out his vial upon the seat of the beast; and his kingdom was full of darkness; and they gnawed their tongues for pain,

Jer 4:23 I beheld the earth, and, lo, it was without form, and void; and the heavens, and they had no light [full of darkness].

Rev 18:2 And he cried mightily with a strong voice, saying, Babylon the great is fallen, is fallen, and is become the habitation of devils, and the hold of every foul spirit, and a cage of every unclean and hateful bird [demon].

Isa 34:11 But the cormorant [corvus|raven|Apollo] and the bittern [heron|heros|gods|demons] shall possess it; the owl also and the raven shall dwell in it: and he shall stretch out upon it the line of confusion, and the stones of emptiness.

Rev 9:11 And they had a king over them, which is the angel of the bottomless pit, whose name in the Hebrew tongue is Abaddon, but in the Greek tongue hath his name Apollyon [Apollo].

Eph 4:17 This I say therefore, and testify in the Lord, that ye henceforth walk not as other Gentiles walk, in the vanity of their mind,

Eph 4:18 Having the understanding darkened, being alienated from the life of God through the ignorance that is in them, because of the blindness of their heart:

Eph 4:19 Who being past feeling have given themselves over unto lasciviousness, to work all uncleanness with greediness. […]

Eph 4:31 Let all bitterness, and wrath, and anger, and clamour, and evil speaking, be put away from you, with all malice:

Eph 5:11 And have no fellowship with the unfruitful works of darkness, but rather reprove them.

Having just time traveled, we’ve fallen backward again, lost in time, alarmingly indifferent to the mental stress inflicted upon us by calendars of The Great Men Of The Earth. The seventh month, September (you thought it was the ninth), brings us through a time of darkness, the equinox. Falling backward we stumble through to the tenth month, December (you thought it was the twelfth), everlost in the festivities of those who program Society in the manner and fashion of him whom is borne of the red dead. Be fooled not. Humanity is slated for the chopping block. With the orderly finesse of machine run mass production factory line, deaf, dumb, blind, mute, nakedly unquestioning the wide road to destruction the herd is being conveyer belt driven to. VR eyes behold the myriad tantalizing distractions on walls of emptiness, never heeding the prompting of His code, Everknocking on the heart, failing to heed, darkness craven, death their haven.

Joh 3:19 And this is the condemnation, that light is come into the world, and men loved darkness rather than light, because their deeds were evil.

As humanity eats through the ninth month, November (you thought it was the eleventh), “remember, remember the fifth of November.” You see, calendar anomalies are their specialty, The Great Men Of The Earth (their ubiquitous symbol, the “V”, or 5). Their signature being the order they bring from the confusion they cause. Manifesting light from their darkness. November, November, the 9/11 of the mind. The horizon is the countdown. Darkness is descending as the light of humanity is dimming. Automation is replacing those made in the image of God. As the nexus of all that was forthtold unfolds, the prophecies of the dark lord replicate, spells cast by his Holy Wood, humanity’s fascination with mechanism will lead to their desolation.

Mat 24:22 And except those days [Days of Automata] should be shortened, there should no flesh be saved: but for the elect’s sake those days shall be shortened. 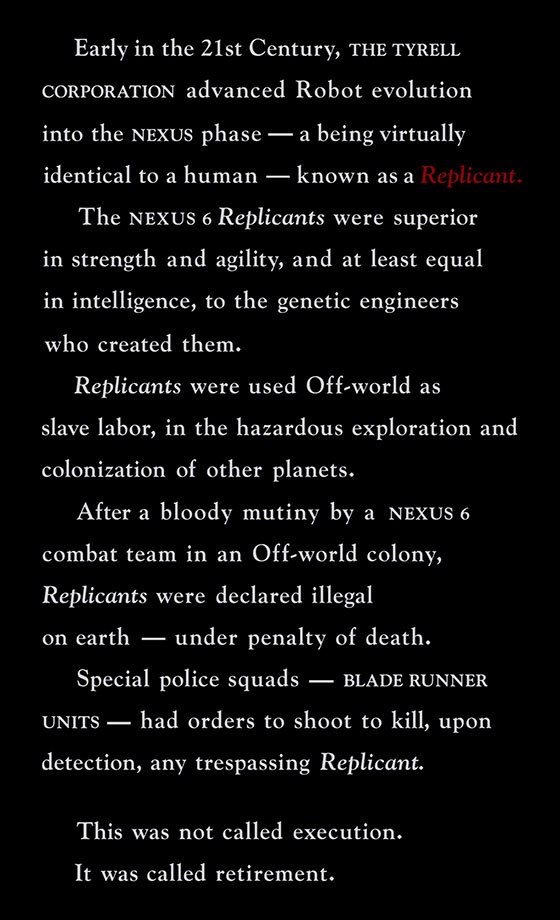 Descent Of Darkness | The Other 9/11 | Humanity’s Descent

In the futuristic year of 2019, Los Angeles has become a dark and depressing metropolis, filled with urban decay. Rick Deckard, an ex-cop, is a “Blade Runner”. Blade runners are people assigned to assassinate “replicants”. The replicants are androids that look like real human beings. When four replicants commit a bloody mutiny on the Off World colony, Deckard is called out of retirement to track down the androids. As he tracks the replicants, eliminating them one by one, he soon comes across another replicant, Rachel, who evokes human emotion, despite the fact that she’s a replicant herself. As Deckard closes in on the leader of the replicant group, his true hatred toward artificial intelligence makes him question his own identity in this future world, including what’s human and what’s not human.

As humanity is reduced to a reusable resource recycled by the sands of time, remember, remember it’s not December but September. Our time in His hands.

Dan 9:24 Seventy weeks are determined upon thy people and upon thy holy city, to finish the transgression, and to make an end of sins, and to make reconciliation for iniquity, and to bring in everlasting righteousness, and to seal up the vision and prophecy, and to anoint the most Holy.

Dan 9:25 Know therefore and understand, thatfrom the going forth of the commandment to restore and to build Jerusalem unto the Messiah the Prince shall be seven weeks, and threescore and two weeks: the street shall be built again, and the wall, even in troublous times.

Dan 12:12 Blessed is he that waiteth, and cometh to the thousand three hundred and five and thirty days.

Dan 12:13 But go thou thy way till the end be:for thou shalt rest, and stand in thy lot at the end of the days.

Rev 16:15 Behold, I come as a thief [under cover of darkness]. Blessed is he that watcheth, and keepeth his garments, lest he walk naked, and they see his shame.

Supermoon on November 14 will be biggest since 1948 – CNN.com

Here’s how to see the biggest supermoon since 1948

(CNN)If you step outside on November 14, you might notice the moon is looking bigger and brighter than usual.

Bigger in fact, than it has appeared at any point in the last 68 years, say scientists.

This month’s supermoon, the penultimate of the year, will be the biggest so far of the 21st century.

A “supermoon” occurs when the moon becomes full on the same days as its perigee, which is the point in the moon’s orbit when it is closest to Earth.

The term is borrowed from the pseudoscience of astrology but has been adopted by popular culture and astronomers.

Supermoons generally appear to be 14% bigger and 30% brighter than other full moons.

While such moons occur around every 13 months, November’s is a special one.

According to NASA, this month’s supermoon “becomes full within about two hours of perigee—arguably making it an extra-super moon.”
In America, the November full moon is known as a “Beaver Moon,” because it arrives at the time of year when fur trappers would hunt the dam-building animals.
Best way to see a supermoon? On a Chinese moon-viewing flight

When and where to see?

For viewers in eastern North America and Europe, the best view will likely be on the night of November 13, or the following night.

Early risers on the US West Coast should be able to spot it near its fullest at 5:52 a.m. PST, as the sun does not rise in that region until 6:25 a.m.

Moon spotters in Asia are perhaps the best placed to catch the moon at its absolute largest, with full moon occurring at 9:52 p.m. Hong Kong time, or 7:22 p.m. in India.

A month after the mega-supermoon, another supermoon will rise on December 14.

It too will be a sight to behold, but it’ll also limit our opportunity to see something just as beautiful — a Geminid meteor shower.

The Geminid meteor shower, an annual event, got its name because the meteors look like they’re coming from the constellation of Gemini.

But the supermoon’s brighter light will drastically reduce the number of meteors you’ll be able to see.

NASA says we’ll be lucky if we see a dozen meteors in an hour at the shower’s peak, when normally the shower lights up the night sky with more than 100 meteors per hour.

CNN’s Doug Criss and Holly Yan contributed to this story.