As noted by researcher Steve Quayle, “Psych operations are underway to condition mankind for the giants return!”
After viewing the post on 2015-06-09:

The “art” is not isolated to one artist.

Are We Being Prepared For The Return Of The Giants? Bizarre Performance Art, Giant Puppets And Marionettes, Baby Cannibal Sculptures, And Extraordinarily Large Babies Being Born!
http://allnewspipeline.com/Are_We_Being_Prepared_For_The_Return.php

And if you look into the work of London-based sculptor Ron Mueck, you will see a predominance of larger than life, albeit gigantic “art”.

Here is a good side-by-side display of Mueck’s sculpture which conveys a pattern.

Pattern analysis: the sculptures are either gigantic or little.
What’s interesting is, that fits the model that researcher Steve Quayle has been writing about for years.

GENESIS 6 GIANTS – Volume 2 (Book)
Master Builders of Prehistoric and Ancient Civilizations
The master work of research and insight on Giants by Steve Quayle.

LITTLE CREATURES by Steve Quayle (Book)
In this book, author Stephen Quayle examines the legends and fairytales surrounding little creatures, and reveals how these tales provide clues, and secrets that can be assembled like a jigsaw puzzle to give an amazing picture of our past and a preview of our future. Coupled with modern sighting of these creatures, you’ll discover the true nature of these supernatural creatures, and the dangers they pose to each human being on our planet.
http://www.stevequayle.com/index.php?s=26

Whether consciously or not, “psych operations are underway to condition” the public at large.

Coincidently, Ron Mueck, was the creator of the “Gentle Giant” Ludo from the 1986 film Labyrinth by Jim Henson and George Lucas, starring David Bowie.

Past: Mr Mueck, left, used to be a prop maker and puppeteer – he was behind Ludo the ‘Gentle Giant’ on the 1986 film Labyrinth http://www.dailymail.co.uk/news/article-2514500/Are-life-like-sculptures-produced-Artist-creates-hyper-realistic-models-humans.html

Giant sculptures by Ron Mueck – picture-o-rama
Ron Mueck is an Australian, born in 1958., sculptures one of many hyper realistic works with silicone, acrylic and fiberglass.
The following pictures are example of his work in which he also grants his figures the expressions of feelings.
http://www.pictureorama.com/2006/11/giant-sculptures-by-ron-mueck.html

And what is the dominant theme? Unnatural beings of supernatural origin.
You see, the giants are the progeny of fallen beings (angels) seeking to corrupt the genetics of mankind.

ANGEL WARS – Past, Present and Future by Steve Quayle (Book)
“Humanity hangs in the balance, with secret, powerful forces aligned against it. Angel Wars reveals the truth, and shows how you can prepare for the monumental war that will determine whether you’ll retain your freedom and whether your children and grandchildren will grow up as serfs or free people. Or even whether they’ll live or die. It’s a conflict that will be hard fought. And it’s a confrontation you cannot afford to lose.” – Stephen Quayle
http://www.stevequayle.com/index.php?s=87

“Ron does both huge scale and smaller scale sculptures that I think would just be fascinating to see. For example, some of his larger-scale work would make you feel like you were spending time with an honest to god giant[.]
http://www.thebuzzmedia.com/ron-mueck-super-realistic-sculptor/

Ron Mueck: bigger than Monet? – Telegraph
The startlingly realistic figures in Ron Mueck’s first Scottish exhibition are drawing huge crowds. Serena Davies sizes up an acute observer of modern life
In pictures: in the studio with Ron Mueck
In 2001, the art dealer Anthony d’Offay suddenly closed his hugely successful London gallery. At one swoop he dissolved the most magnificent stable of contemporary artists in Britain – Gilbert and George, Anselm Keifer, Jeff Koons, Gerhard Richter, to name just a few giants of the art scene. And, from all these, there was a single artist d’Offay chose to continue to represent: Ron Mueck.
http://www.telegraph.co.uk/culture/art/3654545/Ron-Mueck-bigger-than-Monet.html

Truth be told, there is nothing new under the sun.
Art is the observation of – “nanos gigantum humeris insidentes”.

Artistic observation “by standing on the shoulders of giants:
https://en.wikipedia.org/wiki/Standing_on_the_shoulders_of_giants

Num 13:33
And there we saw the giants, the sons of Anak, which come of the giants: and we were in our own sight as grasshoppers, and so we were in their sight. 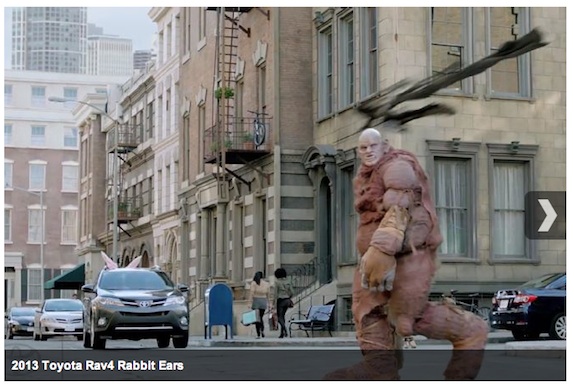 There were two other very relevant commercials I remember from recent Super Bowls.
I have not located either yet.
The first was dealing with giant people walking amongst buildings / airplanes (I believe it was an airline commercial; Singapore airlines).
The second was a car commercial (Audi), where people were sprouting wings.
http://www.superbowl-commercials.org