Form, Function, Or Ritual
The Freemasonization Of America – The Ouroboros, Kabbalah, And Technology

Having a form of godliness, but denying the power thereof: from such turn away. (2Ti 3:5)

Whether or not I am right in my observations is secondary to exercise in seeing other meanings not readily apparent, discernible, or intended for the befuddled masses.

The more you know, the more sorrow.

For in much wisdom is much grief: and he that increaseth knowledge increaseth sorrow. (Ecc 1:18)

Jesus – The Man Of Sorrow.

He is despised and rejected of men; a man of sorrows, and acquainted with grief:
and we hid as it were our faces from him; he was despised, and we esteemed him not.
Surely he hath borne our griefs, and carried our sorrows:
yet we did esteem him stricken, smitten of God, and afflicted. (Isa 53:3-4)

KJV
And we know that we are of God, and the whole world lieth in wickedness.

NLT
We know that we are children of God and that the world around us is under the control of the evil one.

Sadly, human nature is to underestimate the power of, our adversary, “the dragon, that old serpent,
which is the Devil, and Satan”, the fallen cherub, Lucifer (the beautiful light bearer) and
simultaneously limit the omni-characteristics of the Creator/Savior God.

Reality is the best Science Fiction.

All there is is Magick.
Whether we understand it or not is called Science.

Because, nothing is as it seems.

What if the words we spell, are by their very nature, cursive.

SYMBOLS and their MEANING
http://www.crossroad.to/Books/symbols.html

The City of Angeles – Los Angeles

When we spell a word.
What actually happens?
Is there a metaphysical event?

When we spell cursive, is a curse enacted? Akin to the metaphysics of power drawn from the drawing of symbols.

The Ouroboros, Kabbalah, And Technology

As analog is to rotary, is to Ouroboros.
So, digital is keypad, is to Kabbalah.

Ouroboros
From Wikipedia, the free encyclopedia
For other uses, see Ouroboros (disambiguation).
The ouroboros or uroboros (/jʊərɵˈbɒrəs/; /ɔːˈrɒbɔrəs/, from the Greek οὐροβόρος ὄφις tail-devouring snake) is an ancient symbol depicting a serpent or dragon eating its own tail.

Drawing by Theodoros Pelecanos, in a 1478 copy[1] of a lost alchemical tract by Synesius.
The ouroboros often symbolizes self-reflexivity or cyclicality, especially in the sense of something constantly re-creating itself, the eternal return, and other things such as the phoenix which operate in cycles that begin anew as soon as they end. It can also represent the idea of primordial unity related to something existing in or persisting from the beginning with such force or qualities it cannot be extinguished. While first emerging in Ancient Egypt, the ouroboros has been important in religious and mythological symbolism, but has also been frequently used in alchemical illustrations, where it symbolizes the circular nature of the alchemist’s opus. It is also often associated with Gnosticism, and Hermeticism.

Carl Jung interpreted the ouroboros as having an archetypal significance to the human psyche.[2] The Jungian psychologist Erich Neumann writes of it as a representation of the pre-ego “dawn state”, depicting the undifferentiated infancy experience of both mankind and the individual child.[3]
http://en.wikipedia.org/wiki/Ouroboros 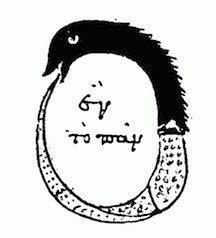 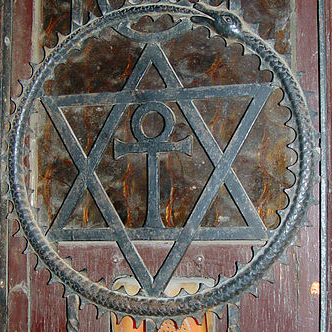 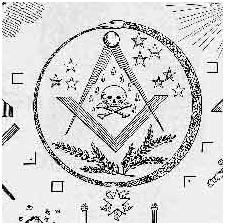 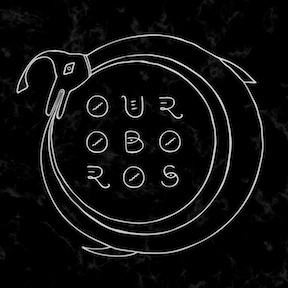 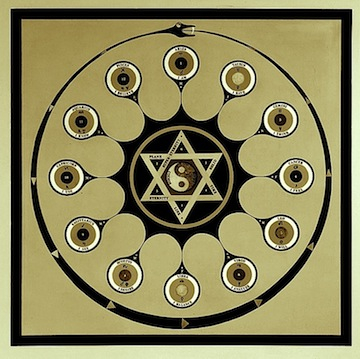 The 9 Spheres of The Vitruvian Labyrinth
https://scottgrossberg.files.wordpress.com/2012/02/vitruvian-square-labyrinth-9-spheres.jpg 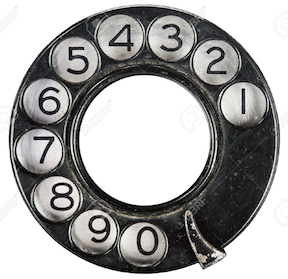 As analog is to rotary, is to Ouroboros.
So, digital is keypad, is to Kabbalah.

Kabbalah
From Wikipedia, the free encyclopedia
Kabbalah (Hebrew: קַבָּלָה‎, literally “receiving/tradition”[1] is an esoteric method, discipline, and school of thought that originated in Judaism. A traditional Kabbalist in Judaism is called a Mekubbal (Hebrew: מְקוּבָּל‎).

Kabbalah’s definition varies according to the tradition and aims of those following it,[2] from its religious origin as an integral part of Judaism, to its later Christian, New Age, and Occultist syncretic adaptations. Kabbalah is a set of esoteric teachings meant to explain the relationship between an unchanging, eternal, and mysterious Ein Sof (infinity)[3] and the mortal and finite universe (God’s creation). While it is heavily used by some denominations, it is not a religious denomination in itself. It forms the foundations of mystical religious interpretation. Kabbalah seeks to define the nature of the universe and the human being, the nature and purpose of existence, and various other ontological questions. It also presents methods to aid understanding of the concepts and thereby attain spiritual realisation.

Kabbalah originally developed entirely within the realm of Jewish thought, and kabbalists often use classical Jewish sources to explain and demonstrate its esoteric teachings. These teachings are held by followers in Judaism to define the inner meaning of both the Hebrew Bible and traditional Rabbinic literature and their formerly concealed transmitted dimension, as well as to explain the significance of Jewish religious observances.[4]

Sephirot
From Wikipedia, the free encyclopedia
The Sephirot in Jewish Kabbalah
Sephirot (/sfɪˈroʊt/, /ˈsfɪroʊt/; Hebrew: סְפִירוֹת‎ Səphîrôṯ), meaning emanations, are the 10 attributes/emanations in Kabbalah, through which Ein Sof (The Infinite) reveals himself and continuously creates both the physical realm and the chain of higher metaphysical realms (Seder hishtalshelus). The term is alternatively transliterated into English as Sefirot/Sefiroth, singular Sephirah/Sefirah etc.
http://en.wikipedia.org/wiki/Sephirot 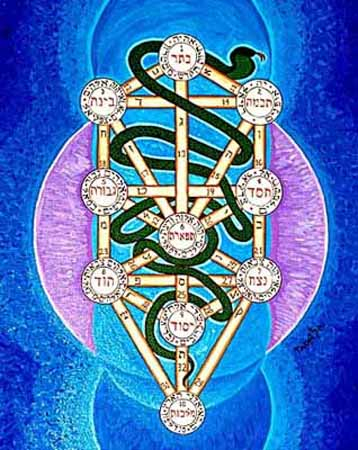 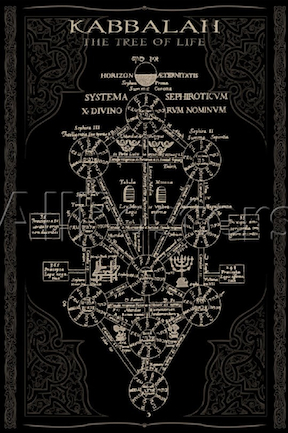 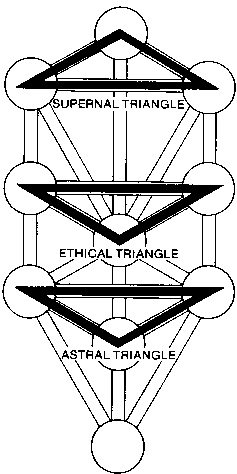 The Vitruvian Square | The Tree of Life
https://scottgrossberg.wordpress.com/2011/05/01/the-vitruvian-square-the-tree-of-life/

Variations on magic squares can also be constructed using letters (either in defining the
square or as entries in it), such as the alphamagic square and templar magic square.

Various numerological properties have also been associated with magic squares.
Pivari associates the squares illustrated above with Saturn, Jupiter, Mars, the Sun, Venus,
Mercury, and the Moon, respectively. Attractive patterns are obtained by connecting
consecutive numbers in each of the squares (with the exception of the Sun magic square).
http://mathworld.wolfram.com/MagicSquare.html 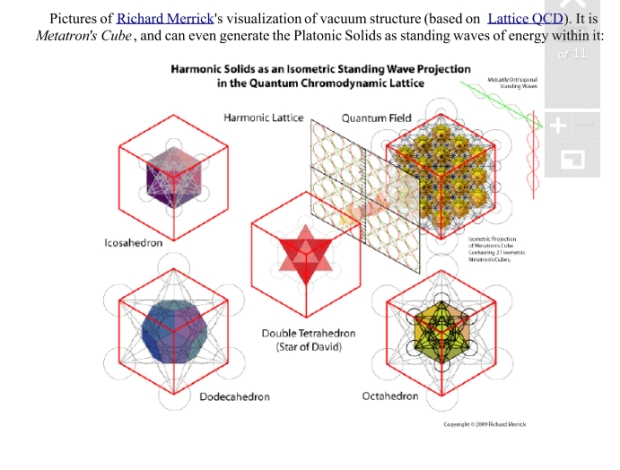 We Weave The Web
https://forthtell.wordpress.com/2014/12/03/weaving-your-thought-for-you-future-past-thought-thinking-as-they-do-the-minds-eye-and-synthetic-synapses-weaving-together-the-internet-of-things-4/ 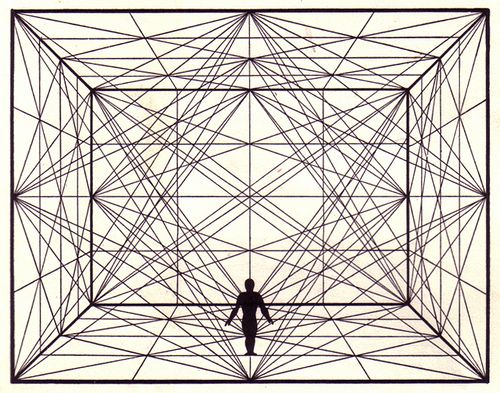 All there is is Magick.
Whether we understand it or not is called Science.

Humans in their current state are finite and subject to deception.
Hence the caveat by God, NOT to seek to occult knowledge or power.
Reason? Because the entities privy to such knowledge and power,
are in league to deceive humanity.

And because there is nothing new under the Sun!
(I wrote the above before I found the following
article. Initially, I did some searching for this train of
thought, and did not find anything remotely close to this
subject. Maybe it is the restrictive internet bubble filter
that restricts what we actually can search for on the
so call free internet.)

Filter bubble
From Wikipedia, the free encyclopedia
A filter bubble is a result of a personalized search in which a website algorithm selectively guesses what information a user would like to see based on information about the user (such as location, past click behavior and search history) and, as a result, users become separated from information that disagrees with their viewpoints, effectively isolating them in their own cultural or ideological bubbles. Prime examples are Google Personalized Search results and Facebook’s personalized news stream. The term was coined by internet activist Eli Pariser in his book by the same name; according to Pariser, users get less exposure to conflicting viewpoints and are isolated intellectually in their own informational bubble. Pariser related an example in which one user searched Google for “BP” and got investment news about British Petroleum while another searcher got information about the Deepwater Horizon oil spill and that the two search results pages were “strikingly different”.[1][2][3][4] The bubble effect may have negative implications for civic discourse, according to Pariser, but there are contrasting views suggesting the effect is minimal[4] and addressable.[5]
http://en.wikipedia.org/wiki/Filter_bubble